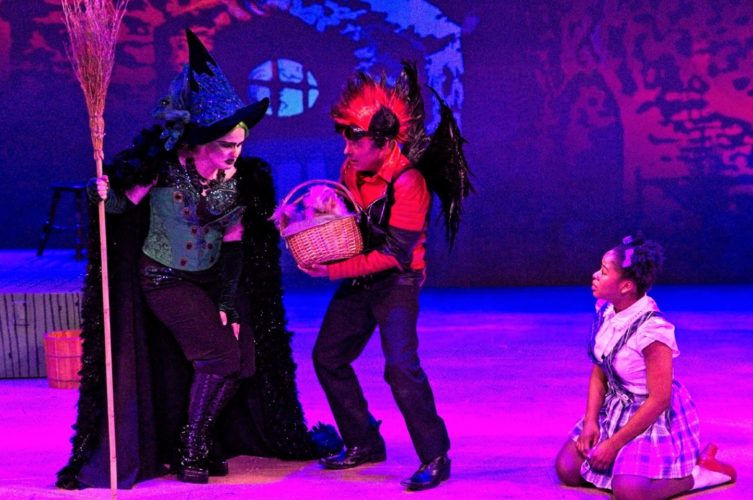 What is the last film you expect to see in its entirety as a stage musical? I would even bet that you will choose The Wizard of Oz. It’s such a perfect movie: Judy Garland, Ray Bolger, Bert Lahr, Margaret Hamilton, Frank Morgan, Jack Haley, seemingly real Munchkins. How can it be better? Well, the representative in Albany, New York, is going to make it a challenge to compete with the best. Director Maggie Mancinelli-Cahill has taken it upon herself to make us forget what we have loved all our lives and find a new amazing Oz, a new Toto, a new Dorothy and friends. In the Emerald City, she and her designers created classic characters on its wide stage in their new theater, brought to life in the hands, voices, faces and skill of interpretation of talented people. It’s not perfect, but who cares? This is Oz.

This stage version closely follows the film’s script. If you know the movie, you can say the lines along with the actors. However, this version brings back the intro to songs you’ve never heard before, written by Harold Arlen and E. Y. Harburg, and that alone gives the stage edition a completely unexpected sense of novelty. It also brings back one major musical number cut from the movie “Jitterbug”, which turned out to be one of the show’s best. Choreography by Freddy Ramirez is something that will live in your memory for a long, long time. Ramirez did a great job of bringing the Mancinelli-Cahill vision to life throughout the show. Its six dancers/singers create wonderful people and creatures, the Munchkins, the Winkys, the Poppies, the cyclone, the people of the city, the plants in the village, the trees in the forest. They are Ariana Andretta, Gabriel Basine Douglas, Joshua DeMarco, Alex Domini, Marco Puente and Shannon Rafferty. I would rate two more of them, but these six are amazing.

Adia Bell is utterly adorable as Dorothy Gale, the little girl whose adventures in Oz intrigue and delight us. If we know the movie, then there is nothing surprising in it, except that this Dorothy plays the ukulele, sings her songs at a different pace and is more capricious and unhurried than her predecessor. When she says goodbye to her friends to return to Kansas, we feel her pain, not just watch her. Bell plays Dorothy with sincerity and charm rather than musical ability, and she’s no slouch in that regard either.

Her friends The Lion (or Zeke), Iron Man (or Hickory), and Scarecrow (or Hunk) provide more than enough support for Dorothy Bell in both worlds, Oz and Kansas. Conor DeVoe is amazing as Metal Man. I could believe he was rusty when his joints were stiff. Kyle Garvin was funny as the Lion, whose roar is worse than his bite. The Lean Scarecrow was played very well by the outspoken Taylor Hilt Mitchell, whose singing was stronger than his body parts.

Uncle Henry (and the Gatekeeper) was played by David Girard, who is always expected for his talent on any stage, Aunt Em (and the good witch of the North Glinda) was played by the very talented Barbara Howard, who played both roles well. Her Glinda singing was beautiful. The wizard was played with strength, humor and confidence by Kevin McGuire, who never seems to be able to do anything wrong. This group of actors rarely imitated the actors who worked before them at MGM in 1939.

The big surprise was the giggling evil witch, aka Miss Elmyra Gulch. She was an unsettling presence throughout the show, which was fine, but when her sinister plot landed her her first musical spot in the restored Jitterbug, she turned into an almost operatic virago who also (surprise!) played the violin. Miss Cathy Faye Francis took on the task of creating an entirely new witch, and there was nothing left of Miss Hamilton, who came up with the role.

A show like this requires a very talented team of visionaries and this show certainly was for that. Production designer Nathan W. Scheuer has outdone himself with his dreary Kansas landscape, his field of poppies, his Emerald City, and, in fact, every gorgeous look on stage. His looks were complemented by wonderful physics sets designed by Frank I. Oliva. The “reminiscent” costumes designed by Howard Zvi Kaplan reminded us of the 1939 film version, and Rob Denton’s lighting design held it all together. The sound design by Geoffrey Salerno was exactly what the production needed. The musical arrangements by Harry Lamb and Josh D. Smith kept music director Eric Schweikar and his six-piece ensemble very busy.

Running for a month, this holiday show is a treat of extraordinary scale, impeccable style and infectious pleasure. Around the theater, I found mine in the men’s room, emerald green show warnings that include prep for noise, oversized visuals, and fantastical characters (a first for me). They fit this transformation of an ideal film into a beautiful play. They embody the cunning wit of author L. Frank Baum, who created it all 122 years ago. I think he will enjoy this show as much as I do.

The Wizard of Oz is playing at theRep (Capital Repertory Theatre) at 251 North Pearl Street, Albany, NY through December 24th. For information and tickets, visit the theater website or contact proctors at 518-346-6204 or [email protected] protors.org.